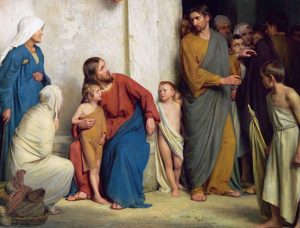 We tend to think of children as precious. However, in Jesus’ day children were at the bottom of society. When Jesus told his disciples to receive a child, he was telling us to welcome the lowest of the low in our world.

The prayer group I’m in is praying a Novena for Peace (http://novenaforpeace.org). This novena has led me to contemplate the consequences of exclusion in a profound way as we confront many issues facing us today. Below is from Day Three, “For an End to the Injustice of Exclusion.”

“But who are the excluded, and what do we owe them?

“They are the unborn, excluded even from the elementary right to life. They are immigrants, who often leave one form of disenfranchisement only to find another in this country. They are refugees, the dispossessed of the earth, who own nothing but their lives, memories, and hopes. They are workers whose jobs have disappeared, leaving them adrift in an economy that privileges efficiency and short-term profit at all costs. They are the elderly, often abandoned and institutionalized. They are racial and religious minorities. They are former soldiers, used up and discarded by the nation for which they sacrificed so much.

“They are people suffering from chronic illnesses, including addiction and mental illness, who fade from view in their struggle to survive day after agonizing day. They are the disabled and the physically handicapped. They are gay, lesbian, and transgendered persons, including young people, who endure cruel words, discrimination, and often violence. They are the imprisoned, especially those without adequate legal representation and those returning to society without a vote. They are the lonely, the loveless, the alienated, those who don’t or can’t fit society’s expectations. The excluded are all those on the margins, the ridiculed and dismissed, the invisible and the weak. And, of course, they are the homeless and the poor.

“And yet, we learn in Scripture that “God chose the weak things of the world to shame the strong.” (I Corinthians 1:27) Of all the ways Christ could have come to be among us, he chose the condition of exclusion: “He had no beauty or majesty to attract us to him, nothing in his appearance that we should desire him; he was despised and rejected by mankind, a man of suffering, and familiar with pain. Like one from whom people hide their faces he was despised, and we held him in low esteem.” (Isaiah 53:2, 3)

“What do we owe the excluded, with whom Christ shares such an intimate identity? We owe them what we owe him: LOVE.”

God’s love to you and to everyone, especially the excluded among us.

Catholic Online > Saint of the Day