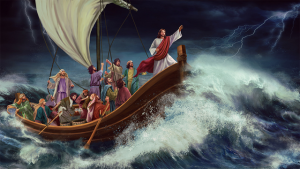 A week ago Thursday, Olga and I went to a restaurant that had just reopened.  For the first time in over two months, we sat down and enjoyed a meal together.  Finally, I thought, life was going to start to get back to normal.  Then I got home and turned on the news.

For the next several days, I watched in stunned disbelief as our nation descended into chaos.  Peaceful protests often devolving into anarchy, with many people looting and vandalizing, while police often stood by and watched.  Even worse, it seems that many voices in the media (and in government) were glorifying the looters and vilifying the police.  The latest proposal by many of these ‘voices’ is to disband and defund our police forces.  Really?

On top of all this, our church is under attack.  For two months now we’ve been prevented from gathering as the body of Christ to celebrate Mass. And now that we’re finally allowed to celebrate, we have the government telling us how it must be done.  Really?

I can’t help but ask myself – how did we ever get to this point?  It’s hard to believe this is the same country that I grew up in.  Where are the voices of reason and why aren’t they being heard?  I feel like I’m in a movie, I’m just not sure which one…Groundhog Day or Twilight Zone.  Certainly this can’t be real!  And yet it is.  It’s saddening to say the least.

But friends, hope is not lost.  It’s not lost because we are Christians!  We are part of something bigger!  Bigger than coronavirus, bigger than these current protests, bigger than the United States even.  We are part of the Church, the Body of Christ!  Our church has been around for 2000 years and for all those years it has faced adversity.  It has weathered storms much bigger than the one we currently face.  When all of this chaos is over and long forgotten, our Church will still be around.  Jesus Christ and his Church are the rock that we must anchor our lives to.  If we do that, we can weather not only this storm, but any storm that comes our way.

Today is the feast of St. Boniface, who converted Germany to Christianity in the 8th century.  He was someone who knew adversity well.  In a letter from today’s Office, he writes:

In her voyage across the ocean of this world, the Church is like a great ship pounded by the waves of life’s different stresses.  Our duty is not to abandon the ship but to keep her on course. The ancient fathers showed us how we should carry out this duty:  Clement, Cornelius, Cyprian, Athanasius and many others…They all lived under emperors who were pagans; they all steered Christ’s ship – or rather his most beloved spouse, the Church.

You and I are not the captains of the ship, but we’re all on board.  Especially now, as the waves pound against our hull, we all need to grab an oar, put it in the water and help propel our ship where it needs to go.

Masses begin again at St. Joe’s this weekend, and I for one am going to grab an oar and row!  I hope you’ll join me.

Saint of the Day